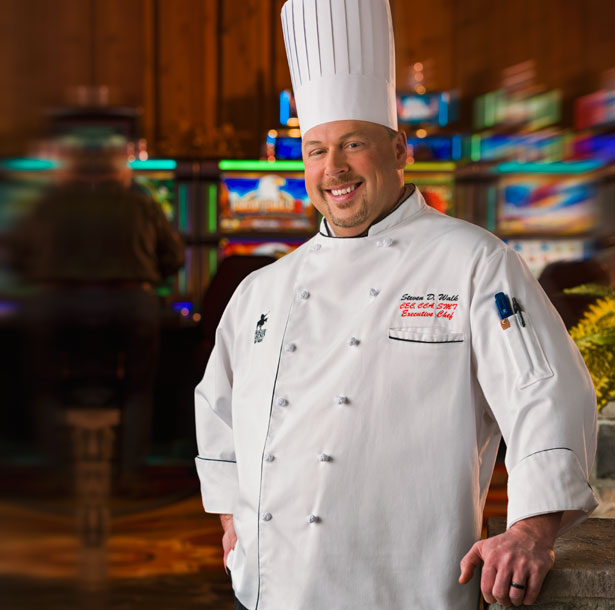 Coeur d’Alene Casino Executive Chef Steven Walk began his career in the restaurant industry as a dishwasher when he was just 13. It wasn’t long before he found his passion in the energy and excitement of the kitchen and by the time he was 16, he became lead line cook at a steakhouse in his hometown of Alliance, Ohio. He attended a vocational school his junior and senior years in high school, taking courses in culinary arts and restaurant management where his instructor encouraged him to pursue a degree. In 1990 Walk graduated from the Culinary Institute of America in Hyde Park, New York, one of his proudest moments.

Walk has proven himself as an extremely skilled chef during his 20-year career, gathering diverse experience along the way. During his time at Ashland University, Embassy Suites, Marriott and Holiday Inn, he learned to handle large scale dining operations. He was also executive chef at St. Vincent College, which hosts the Steelers’ training camp. During his time in Pittsburgh, Walk honed his garde manger skills learning fruit, vegetable and ice carving, even working at a local icehouse with a Master Ice Carver. He has since won several awards and medals in various cooking and ice carving competitions.

Chef Walk enjoys that every day in the kitchen is different and is committed to Coeur d’Alene Casino Resort Hotel’s mission to use products and ingredients that are locally grown and cultivated. “Locally sourced food is generally a better quality product, harvested at peak ripeness resulting in better flavors,” said Chef Walk. “But beyond that, we support the local economy that supports us and in today’s world our customers want to know where their food is sourced.”