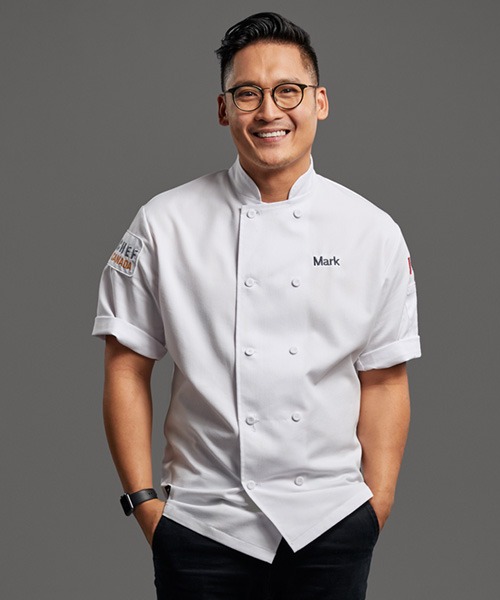 Mark recently placed runner up on Top Chef Canada Season 6 where
he was referred to as a ‘magician’ in the kitchen, as well as a ‘mad scientist’
for taking familiar dishes, breaking them apart, and reintroducing them as
something visually different but each bite hits all of the nostalgic notes.

His culinary career started at Cactus Club with a passion for eating at the age of 16, fuelled by his role model mother who was a chef herself, turned into a genuine desire to not only push boundaries with his cooking style but also for the love of small details that add up to create the ultimate dining experience everywhere he goes.

Over the years Mark has been honoured to work in Vancouver at The Fairmont Pacific Rim, Oakwood, and Boneta, to name a few. With a year before his new project opening up, he ventured off to Melbourne, Australia where he worked at Vue De Monde, and Saint Crispin. He hosted the first of many Pop-Ups while in Australia with much success.

Mark came back and successfully helped open up the acclaimed AnnaLena, which quickly became EnRoute’s #6 on the Top 10 Best New Restaurants in Canada list. After a year and a half he felt he needed more room for creative growth and parted ways to put all of his energy into creating his own company that specialized in creating unique Pop-Ups and Private Dining experiences that unites all of his core passions of Food, Art, and Music, called FAM Inc. Mark’s menu, and flavour profiles can still be tasted, and his impression on the restaurant can still be felt to this day.

FAM Inc started with Mark’s passion to deliver delicious dining experiences yet bold enough to let you rethink what you experienced by pushing the  boundaries with the inspiration he draws in from his environment, the arts, and the music that surrounds him. One of the most significant aspects that can be felt throughout all of his events is the importance of family unity.

Mark has proven to be fearless in the culinary scene, which goes hand in hand with his love of the city and ability to live outside of the box all the while remaining humble which led him to recently being honoured to represent one of the Lexus’ Master Class series four brand values, as a Brave Design Master celebrating his courage to stand out and elevate something purposeful to something extraordinary.