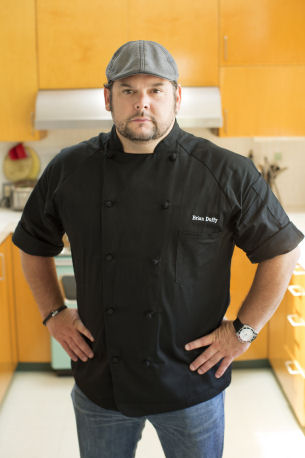 Born and raised in Philadelphia, PA, Chef Brian Duffy had his first experiences in the kitchen as a young child with his big Irish-Italian Family. Those experiences introduced him to culinary life and led him to study at Philadelphia’s The Restaurant School at Walnut Hill College. Culinary school may have taught him technique, but it was those Sunday nights cooking with his family where he developed his passion.

Duffy is perhaps most recognized from his abundant television appearances on the wildly popular Spike TV series Bar Rescue, where he tours the country (sometimes on his Harley Davidson) reforming failing bars and restaurants with his “tell it like it is” style. He made his on-camera debut on the Food Network series Date Plate and has appeared on countless segments on the DIY Network, HGTV, NBC, and Fine Living Network. Chef Duffy is also a regular to judge the Food Network series Beat Bobby Flay and has appeared on The Today Show since 2006 for the St. Patrick’s Day Irish cook-off. Chef Duffy even has his own line of signature spices, “Duffified Spice” as well as a line of T-Shirts, Kitchen aprons, Hats & chef driven Hand soaps which are all available on his website www.duffified.com.

Currently Duffy has collaborated with Rock Hard Media Group and created “Duffified Live” a travel show with an over the top approach to eating, drinking & traveling has taken off due to his attitude & stories from the road, the industry & his personal life & stories. When he isn’t with clients, taping or traveling he is working on his soon-to-be-released modern gastropub cookbook or hanging out with his family in the suburbs of Philadelphia.